Program – Events Throughout the Day

Over the course of more than two decades, the AWS has become internationally respected for its musical excellence, service to the community and contributions to music education. Their patriotic selections are a highlight of the Roswell Memorial Day Ceremony.

This band was formed by Rory Howe, with the Roswell Police Department approximately 12 years ago with the thought of being the first Law Enforcement agency in the state, to have a police pipe band. It is a paramilitary band, consisting of 12-16 individual pipers and drummers who all have the same love of the Scottish tradition and the skirl of the pipes, wearing the Chattahoochee tartan designed specifically for Roswell, by the Scottish Borders, during the ’96 Olympics. The award-winning band plays for numerous civic and community events, parades, and ceremonies, including the annual Roswell Memorial Day Ceremony. For additional information contact Rory Howe @ 770.640.4209.

Our Emcee will be: Moby

Once again Roswell Remembers Memorial Day Ceremony will be hosted by Moby. Moby has a 25-year history as the top morning DJ in Dallas, Houston, and Atlanta, where he was the top-rated morning personality for 10 years. He is creator of “The Biggest Small Town in AMERICA (sm) Radio Network.”

Known for his patriotism, Moby’s respect for those who serve our country, and those who have given their all, is evident as he emcees the military portion of the ceremony.

After the Military Ceremony please enjoy a picnic on the grounds, or purchase BBQ available on site, as you listen to live music. 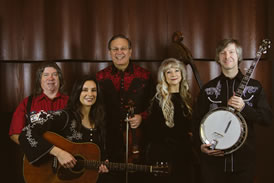 The Chuck Nation Band is a world class ensemble of award winning performers and one of the most entertaining and versatile groups in bluegrass/acoustic music.  Whether it’s old favorites, modern songs, or original material, the Chuck Nation Band delivers professional grade, lively music that engages and entertains an audience from the moment they take the stage until the rousing applause at the end of the show.  Close harmony vocals and superb instrumental playing help create their distinctive sound.  The band is based in North Georgia and has performed over 400 shows since 2010, completed their second tour of Ireland in 2014 covering sixteen cities, and will debut in New York City at Carnegie Hall in May 2015.