In Flanders Fields – One of the greatest war poems

Major John McCrae (Canadian Army) was a doctor serving in the “Second Battle of Ypres”. He was the second in command of the 1st Brigade Canadian Field Artillery. Although the deaths and suffering were unimaginable, one death particularly affected Dr. McCrae: Lt. Alexis Helmer, an officer in the 2nd Battery, 1st Brigade was a dear friend of Dr. McCrae’s. On May 2nd 1915, Lt. Helmer was killed instantly by a direct hit from an 8 inch German shell. Gathering his body, they placed the 22 year old officer in a blanket for burial.During the First Battle of Ypres (1914) a small cemetery had been established. It was in this burial ground that Lt. Helmer was placed. His friend, Major John McCrae, conducted the service at graveside. A simple wooden cross marked the grave. The graves in this cemetery, although unadorned, were interspersed with vivid poppies that sprang up throughout the field. Although there are many stories that tell of the inspiration for the poem, it is known that Major McCrae was deeply moved by his experiences in this arena. The death and devastation was such that he earlier wrote:

I wish I could embody on paper some of the varied sensations of that seventeen days. …. Seventeen days of Hades! At the end of the first day, if anyone had told us we had to spend seventeen days there, we would have folded our hands and said it could not have been done.

In Flanders Fields
In Flanders Fields the poppies blow
Between the crosses row on row,
That mark our place; and in the sky
The larks, still bravely singing fly
Scarce heard amid the guns below.

We are the dead. Short days ago
We lived, felt dawn, saw sunset glow,
Loved and were loved, and now we lie
In Flanders fields.

Take up our quarrel with the foe:
To you from failing hands we throw
The torch; be yours to hold it high.
If ye break faith with us who die
We shall not sleep, though poppies grow
In Flanders fields.

The Flanders Fields red poppy was introduced as a symbol of remembrance of those who died by a University of Georgia teacher, Moina Michael. Since she had volunteered for war work with the YMCA, she was called up for service as one of the overseas YMCA war workers. Although she completed her training, she was prevented from overseas service due to her age, 49. Instead of overseas service, she worked for the training headquarters. In this position she witnessed many heart-rending “goodbyes” as loved ones sent soldiers off to war.

Having read the poem “In Flanders Fields” many times, Ms. Michael was particularly haunted by the last verse:

To you from failing hands we throw the torch; be yours to hold it high. If ye break faith with us who die, we shall not sleep, though poppies grow in Flanders Fields. 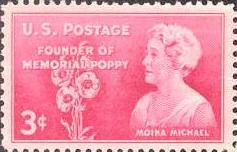 She likened it to a spiritual quest that was calling to her. She vowed to always wear a red poppy of Flanders Fields as a sign of remembrance and establish it as an emblem for keeping the faith with all who died. Her quest was overwhelming, but she was determined to get the poppy emblem adopted as a national memorial symbol. A campaign she would take on at her own expense.

The first sale of the Flanders Fields Memorial Poppy is recorded by Ms. Michael as November 9, 1918. Since then, the poppy has become a symbol of remembrance at many Memorial Day services across the country and throughout the world.

In 1948 the US Post Office honored Ms Michael for her role in founding the National Poppy movement by issuing a red 3 cent postage stamp with her likeness on it.